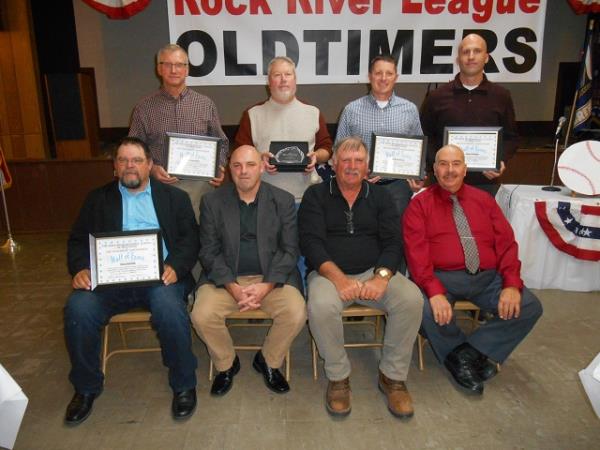 Congrats to the 2018 Rock River Hall of Fame inductees shown below. They were honored at this year's Oldtimers Banquet on Saturday, October 27th at the Lions Hall in Clyman.

Doug Gonring – 55, lives in Kewaskum and works at West Bend Elevator. Doug caught for Kewaskum from 1988-1998. Doug’s greatest achievements were playing for Kewaskum and getting to the Championship games. Getting Kewaskum in the RRL was a big achievement as well. Doug could not remember any one humorous incident but remembers most all of the fun and storytelling after the games. “I sure did enjoy Saturday and Sunday afternoons for 10 years”. Doug’s top opponents were Kirk Kaul of Hustisford, Mike Urban and the Ryan brothers from Oakfield, Craig Semler and the Rubicon teams and fans, Dave Geldnich, Robby Michels and the whole Slinger community and the Cole brothers from Brownsville.

Charlie Hurtgen – 41, lives in Watertown and is a Financial Consultant at MPC Advisors in Brookfield. Charlie pitched, played 1st base and the outfield for Watertown from 1993-1995 and Clyman from 1996-2011. Charlie was the 2011 Sothern Division MVP and Batting Champion, hitting .522 and the 2005 Southern Division Batting Champion. He played on 6 Championship teams (4 with Clyman and 2 with Watertown), and played in the RRL Playoffs 18 out of 19 years. He also was named to at least 10 All Star teams. Humorous Incident – “Many of them have been well documented by other Hall of Famers but one “humorous day” in our season was “Take batting practice in your underwear or sliding shorts day” It was always a fan favorite! Charlie’s top opponents were Shane O’Hagen of Rubicon, Chris Morgan of Oakfield, O. J. Sukow of Helenville and Lance Pirkel of Watertown/Helenville.

Glen Lauersdorf- 65, lives in Watertown and is a CNC Machinist. Glen pitched for Neosho in 1971, Ashippun from 1972-1981 and Lebanon in 1982. Glen was named to numerous All-Star games. He played in one of the Rock River League/Land of Lakes All Star games where he pitched the first three innings, retired all 9 hitters and was named the Outstanding Pitcher of the game. “I was able to play and compete with outstanding, talented ball players. I consider it an honor and a privilege to play in the Rock River League”. Glen named his top teammates as well as his top opponents. The list includes; Lynn Held – Lebanon, Don Held – Lebanon, Gary Wild – Juneau, Dan Hintzman – Johnson Creek, Bob Eske – Lebanon, Jim Pirkel – Watertown, Roger Jaeger – Ashippun, Gary Roth – Ashippun, John Stueber – Clyman, Kirk Kaul – Hustisford, Al Alt – Hustisford, Randy Kuehl – Hustisford, Mike Yttre – Lebanon, Phil Nehls – Hustisford, Gary Schwefel – Lebanon and Don Harmeling – Lebanon.

Shane O’ Hagen- 41, lives in Hartford and is a Salesforce CRM Administrator. Shane played 1st base and Outfield for Clyman in 1994 and for Rubicon from 1995-2016. Shane was a 5-time Champion with Rubicon and was Northern Division MVP in 2003. Shane never played on a team with a losing record during his 22 years in the RRL and reached the Playoffs in 20 of those years. Shane’s humorous incident was after winning the Championship in 2006. “The celebration was underway. Aaron Braund announced we had to pay respect to our catcher, Lee Kaul, for all of the squatting behind home plate that year. We had to show our respect by drinking a beer out of his protective cup, to which we all lined up and did, fans included”. Shane’s top opponents were Chris Morgan of Oakfield, Jim Ziegler of Kewaskum and Jamie Hennen of Hustisford.

Steve Salter - 59, lives in Slinger and works in Quality Control at OTR Wheel Engineering. Steve played first base and managed for Mayville (1978) and Slinger (1977, 1979-2003). Steve managed three RRL Grand Championship teams with Slinger (1983, 1984, and 1989). Steve is a former RRL President (2001-2003) Humorous incident – While managing a Nite League game in Rubicon, the guys on the team wanted me to bat. It had been a few years since my last at bat but I reached on a fielder’s choice. Out of breath and panting, I took a very short lead. The next batter, Jason Scherr hit a home run. Even though I did a very slow trot to home, I was completely exhausted. It was almost two days later when I caught my breath. I never batted again! Steve’s top opponents were David and Shawn Burg of Rubicon. Both could play any position including pitcher. They were both extremely clutch hitters and great competitors.