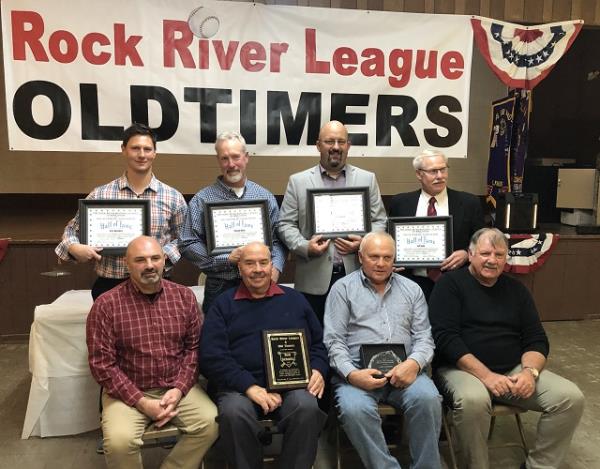 Congrats to the 2019 Rock River Hall of Fame inductees shown below. They were honored at this year's Oldtimers Banquet on Saturday, November 2nd at the Lions Hall in Clyman.  In addition Bob Schulz was honored with a plaque in recognition and appreciation for his many hours of effort and selfless contributions towards the success of the Rock River League.

Shawn Burg – 51, is a carpenter and lives in Slinger. Shawn pitched, played shortstop and left field for Rubicon from 1984-2005. Shawn was a member of four RRL Grand Championship teams with Rubicon. He was pitcher of the year and remembers hitting a 2-run homer with 2 outs in the bottom of the 9th inning to tie a playoff game with Clyman. Shawn feels that playing for 20 years in the RRL were memories that he will never forget. He met and made a lot of friends on and off the field. He loved the competition and rivalries and having a beer after the game with the opponents. He looked forward to every game. He felt these were the best years of his life. Shawn’s top opponents were Doug Gonring – Kewaskum, Kirk Kaul – Hustisford and Chris Morgan – Oakfield.

Tim Ladron – 44, has been a Physical Education and Health Teacher at Beaver Dam High School for 17 years. He has also been the Boys Head Basketball Coach for the past 11 years, compiling an overall record of 162-102. Tim was a pitcher/catcher for Lebanon from 1991-94, Neosho in 1995 and Clyman from 1995-2010.Tim was a four-time RRL Grand Champion (2000, 2007, 2008, 2009). Tim played in 12 RRL All Star Games and was named Southern Division MVP in 2004 & 2007. Tim is very proud to have been able to compete in the RRL for 20 years. Being a part of the “Canner” family made it special. The relationships that were built last a lifetime. Now I enjoy watching some of the young men That I have coached at BDHS have the same type of success with the Canners. Tim’s humorous incident was titled “I can get us a rainout! On a Saturday night of a weekend doubleheader (a rough Saturday night at that), and rain on the way for Sunday, we were hoping for a rainout. In order to ensure a rainout, we drove to Charlie Hurtgen’s parents’ farm and grabbed their truck which had a 300-gallon tank on the back of it. We filled the tank up with water, drove to the field and dumped the water on the mound and homeplate! We got ourselves a rainout! And while it still rained a little that night, Fitz and Lehmo could never figure out why the mound and home plate were so wet! Tim’s top opponents were Kevin Murphy – Watertown/Helenville, Casey Powell – Madison LT and Jamie Hennen – Hustisford.

Eric Roecker – Lives in Fox Point and is the Athletic Director/PE teacher at Bruce Guadalupe Community School on Milwaukee’s Southside. Eric played Short, 2nd and 3rd base for Neosho from 1996-1998 and for Rubicon from 2003-2012 and 2014-2015. Eric Was League MVP and Batting Champion in 2010. He made about 10 All Star teams and was All League at all three positions about 8 times. Eric is a 4-time RRL Champion with Rubicon and played in the playoffs 11 of the 12 years he played at Rubicon. Eric’s humorous incident came in an All-Star game at Lebanon. “I told Matt Marvin (Manager of the All-Star team) not to play me because I had some hamstring tightness. Assuming I wasn’t going to play, I decided that it would be a great idea to have a few beverages behind the dugout during the game. Well, the other 2nd baseman had to leave and since we were pretty much out of players, in the 7th inning, I had to go in. The game ended up going into extra innings and I needed to bat not once, but three times! After striking out horribly the first two times (the ball looked like a pebble coming in), I decided I wasn’t going to strike out again. I had never struck out three times in a game and it wasn’t happening in an All-Star game. Even though I had only beaten out one drag bunt in my career, I laid down a drag bunt. Sadly, it went right back to the pitcher. I deserved that performance! Eric’s top opponents were Chris Morgan of Oakfield, Jimmy Ziegler of Kewaskum and Jami Kaul of Hustisford.

Jeff Roth- 60, lives in Oconomowoc and is a shipping/receiving operator at Clasen Quality Chocolate. Jeff played 3rd base for Oconomowoc for thirteen years before playing for Ashippun from 1990-1996. Jeff was runner-up for the MVP Award in 1990, was part of an RRL Championship team with Ashippun in 1991, and was named to multiple All-Star teams. Jeff hit for the cycle in a game against Lebanon. His last at bat he singled and got thrown out trying to stretch it into a double. Good thing as that was his last at bat of the day. Humorous Incident – “I had singled and was standing on first base when my three-year-old son Lucas came out on the field to give me his Snickers candy bar. I put the candy bar in my back pocket. The next hitter walked. As I was standing on 2nd during the pitching change, I knew I was going to get voted to fill and bring the water jug to the next game. I decided that was a good time to eat my Snickers bar. Jeff’s top opponents were Kirk Kaul of Hustisford. “He never made a mistake down the middle. You had to hit his pitch. He was up, down, in and out and always on the edge of the plate”. Russ Tiedeman of Clyman. “His home runs in Clyman cleared that right field fence by 150 feet. His line drive home runs didn’t go quite that far. They cleared the fence by maybe 125 feet”. The Blocks of Watertown. “It seemed like there Was 11 of them on defense; they were everywhere. All were real good players and win or lose, would stick around and have a couple of beers.

Gary Schwefel – 71, is retired and lives in Lebanon. Gary pitched, played left field and first base for Lebanon from 1962-1988. Gary pitched 2 no hitters in 1966, won batting titles in 1969 and 1971 and was a member of 7 RRL Grand Championship teams with Lebanon. Gary remembers the only time he got thrown out of an RRL game was in Hustisford. Paul Stueber called a very high strike 3 on Mike Weihert. Everyone in our dugout complained and out came some bad words directed at Paul. I was in the on-deck circle when Paul took off his mask and slowly walked toward our dugout with his head down. I turned toward our dugout and said “get ready because somebody is gone”. When Paul got 10 feet from me, he looked up and said “you are gone!”. I said to him, Paul I didn’t say that. He said I know but when I looked up, you were the first guy I saw! Gary’s top opponents were Don Held – Rubicon/Slinger, Jim Pirkel – Watertown and Lou Keller – Ashippun.