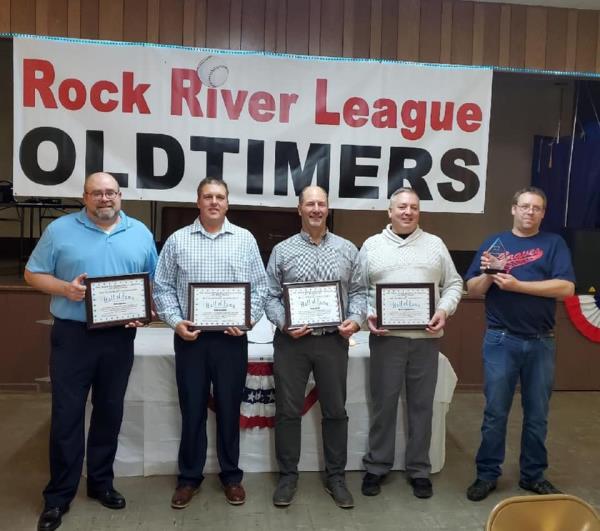 Congrats to the 2021 Rock River Hall of Fame inductees shown below. They were honored at this year's Oldtimers Banquet on Saturday, October 30th at the Lions Hall in Clyman.

Brad Tagliapietra- 52, is an American Family Insurance Agent and lives in Fond du Lac. Brad played centerfield for
Brownsville from 1985-2010. As to what Brad’s greatest achievements were, he said “I really think playing as long as I
did and still pretty productive until the end of my career is one of my greatest achievements. I was able to play outfield
my whole career, even when I lost a lot of my speed is something, I’m proud of. I guess you do become smarter as you get
older. I made 7 0r 8 All Star teams in my first 15-18 years as a player. I followed my dad’sfootsteps, who played many
years for Brownsville and was a really good player. He played 18 years, so combined as a father/son combo, we have 43
years in the Rock River League, all with Brownsville but we never played a game together”. Brad’s humorous incident
occurred in a game at Rubicon in the mid 1990’s. There was some wild pitching going on. A few batters were hit in the
first couple of innings on both teams. About the 4th inning our number 1 & 2 hitters got hit. I was on deck walking to the
plate. Our big #4 hitter, Joe Warner, who is about 280 lbs. of muscle, shouts to the umpire “This nonsense is going to stop
right now or there is going to be blood all over the field” You could have heard a pin drop in Rubicon. The umpire comes
out and warns both teams. I get up to bat and watch 4 pitches outside and got walked”. Brad’s top opponents were Doug
Gonring of Kewaskum, Chris Morgan of Oakfield and Shane O’ Hagen of Rubicon
Andrew Kasten – 51, is a Personal Lines Underwriter with EMC Insurance and lives in West Bend. Andy pitched and
played right field for the Watertown Cardinals from 1987-1998. Andy pitched four complete games during the 1997-98
seasons. He gave up one home run in Rock River League play. Humorous incident – Joe Parish was catching and was
calling a 1 hitter through the top of the 8th while Andy was pitching. Andy Shook him off. Joe threw the ball back to the
mound. It ricocheted off the front part of the mound and hit him in the shin. Joe came out to the mound and said “If you
shake me off when I am calling a 1 hitter, I’ll hit you in the other shin. Andy’s top opponents were Steve Oleshko –
Clyman, Rusty Tiedeman – Clyman and Jamie Hennen – Hustisford.
Terry Koth- 54, is Vice President of Operations – Design 2 Construction Development Corporation and lives in
Cedarburg. Terry pitched and played 3rd base for Long Lake from 1984-1986 and for Kewaskum from 1991-1998. In
1985, Terry won the Batting Title, batting .507 and won the Triple Crown that year also. He made multiple All-Star game
appearances. Terry was named Player of Merit in the Northern Division in 1995. In a game at Oshkosh, Terry had 4 hits, 3
Home Runs including a Grand Slam and had 10 RBI’s. He was a member of the RRL Grand Championship runner-up
team in 1996. Terry hit a home run in his first RRL at bat and his last RRL at bat! “While I don’t recall any humorous
RRL games, I do remember while still playing baseball for the University of Wisconsin and driving back with my
teammate TJ Fischer to play a TCNL game at Lebanon on a week night. The weather was fine and the sun was shining all
the way from Madison to Lebanon. However, our teammates were coming from West Bend and ran into Torrential storms
so bad that when they reached Hustisford, they turned around and went back home, assuming the game wouldn’t be
played. This was before the internet and cell phones, so TJ and I sat in the first base dugout with the sun shining in our
eyes on a perfectly dry field waiting for our teammates who never came. Life Lesson: Always go to the game unless you
are notified it is called off. I lived by that rule for the erst of my career and through my kid’s games too. It never happened
to me again”. Terry’s top opponents were Craig Semler – Rubicon, Mike Urban – Oakfield and Dale Nehls – Hustisford
Kyle Krueger – 38, is a Physical Education teacher at Riverside Middle School in Watertown. He lives in Watertown
with his wife Nikki and their children Ellie and Grayson. Kyle has been a member of the Clyman Canners since 2001
that included a playing career of 16 seasons from 2001-2017. He was also the Manager for the Canners from 2007-2016
that included winning back to back to back titles in 2007, 2008 and 2009. He was a utility player for most of his career,
playing every position but shortstop and centerfield. Kyle had the most success on the mound during the Canners three-
peat run. That included the 2009 season in which he threw 60 innings in the regular season without allowing a single run.
Over his playing career, he was selected to a handful of All-Star Games and was named Manager of the Year 3 times. He
has continued to be a part of the Clyman family while helping to organize their annual Pig Roast and several other team
functions. His favorite memory was when teammate Brett Neckhash was serving overseas in Afghanistan and was home
on leave in 2009. The Canners were hosting a Playoff Game and Brett was suited up. He was able to get his first at bat of
the season in that game and nearly hit a home run, missing by inches. The level of pride the entire team felt having him
back was beyond words. Brett was one of the most selfless guys that has played in Clyman. One of the most humorous
stories that can be shared was when teammate Dan Schauer shaved off Tim Fitzsimmons mustache at home plate after
winning the RRL Grand Championship in 2008 and drinking that mustache down with a beer. Some of Kyle’s top
opponents were Ray Lauersdorf – Neosho, Nick Cahoon – Watertown and the Shere brothers – Milton